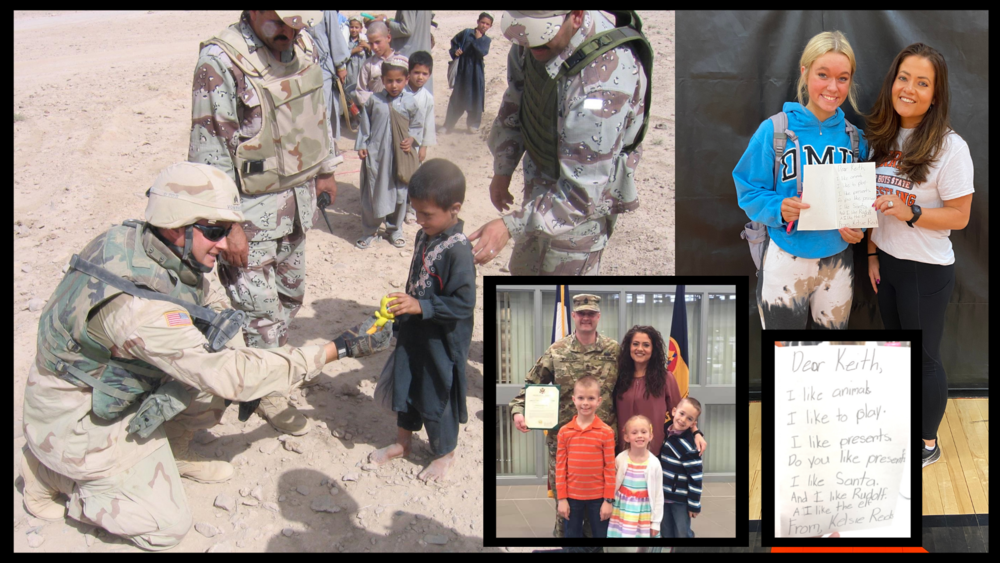 It really is a "Small World" and we can prove it to you with this heartwarming story! Senior Kelsie Reicks was chatting with Mrs. Vonnahme during PE class last week, when Mrs. Vonnahme asked her if she remembered writing letters to soldiers while Kelsie was in Mrs. Nees's 1st grade class. Kelsie said that she remembered, and then Mrs. Vonnahme shocked her and showed her the letter she had written all those years ago! Kelsie couldn't believe it!

Mrs. Vonnahme had the letter because Kelsie had written to Mrs. Vonnahme's husband, Keith, while he was deployed in Afghanistan! Mrs. Nees's first grade class completed acts of kindness and wrote Christmas letters to soldiers who were deployed. (Senior Sara Vonnahme, is Keith's cousin and was also in Mrs. Nees's class that year.)

Keith was deployed in 2010-2011 to Afghanistan for his second tour when he received the letter from Kelsie and the other students. He has kept all of his letters and cards over the years and when he came across the envelope that had Mrs. Nee's class's cards, he asked his wife, who now works at the high school, if she knew any of the students. She did, and Kelsie was one of them!

What a small world! Keith was happy to have rediscovered the letters on the brink of the students graduating this year. Keith told us he's always wanted to say thank you and to let the students know how much those letters meant to him as a soldier in Afghanistan.

Keith served 4 years in the Navy right after high school and then after the 9/11 attacks he decided to enlist with the Iowa National Guard where he served two tours in Afghanistan 2004-2005 and 2010-2011.  Keith just retired from the army in February after 25 years of service as a Master Sergeant.

Thank you for your service, Keith! Never underestimate the power of an act of kindness!