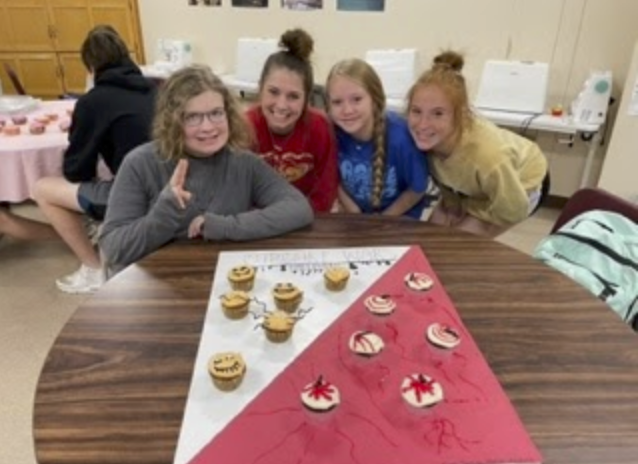 Before Mrs. Helmich's senior Food and Nutrition students leave for the year, she likes to do a fun project called "Cupcake Wars," emulating a popular TV show.  The students have a lot of fun competing against each other while also meeting the following FCS Standards 8.3: Demonstrate industry standards in selecting, using, and maintaining food production and food service equipment and 8.5.10: Prepare breads, baked goods and desserts using safe handling and professional preparation techniques.

A special thanks to those staff members who volunteered to be judges and eat sooo much sugar!!  Class judges were: Miss Ergenbright, Mrs. O'Leary, Mr. Murray, Mrs. Raymond, and Mr. Skillen.  Championship judges were: Mr. Nagl and Mr. McGill.

Judges were asked to score cupcakes on five criteria:

4. Presentation (Are they eye-appealing?)

5. Theme (Cupcakes/decorations go with the theme)

There are three class periods of Food & Nutrition II.  Winners were chosen for each class period and then a Grand Prize Winner was chosen from the three winners.